Wajjun Bazaar is an urban explorable area in the Kaineng City region.

While adventuring in this area, it is a great help to have accepted the quest Seek out Brother Tosai, which will turn all Am Fah from foe to ally. Considering that the majority of foes here are Am Fah, exploring becomes a walk in the park. The Am Fah remain friendly if that quest is completed or abandoned, but accepting a followup quest from Brother Tosai will cause them to become hostile again. 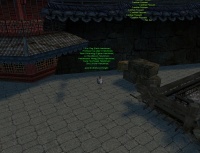