Wanted by the Shining Blade

Wanted by the Shining Blade is a signpost in Lion's Arch Keep. It offers bounty-style quests that give War Supplies as a reward. Targets are White Mantle or Peacekeeper bosses. 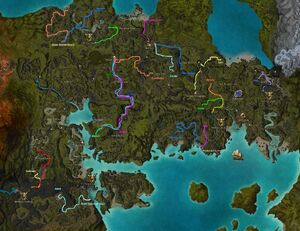 Composite map of all the bounty targets.

The quests given by this signpost are bounties for various Peacekeeper and White Mantle bosses. There are two categories of bounty.

Bounties for the next 7 days:

Bounties for White Mantle Inquisitors are offered in addition to the standard daily bounty. These bounties can be accepted at any time (after accessing Lion's Arch Keep), but they can only be completed once per character. They count towards the 3 quest limit.