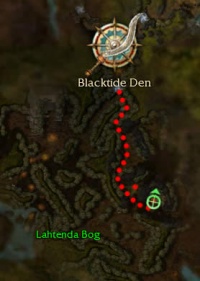 "We don't have the numbers of our enemies, therefore we must compensate in other ways. Dunkoro and Kormir proposed we seek the help of the original Sunspear Guard that served Elona in the days of the Primeval Dynasty. They are interred in the Tomb of the Three Worthies in Lahtenda Bog. Hopefully, time has been kind to their restless spirits. Can we count on you?"

Accept: "It must be done."
Reject: "I must be going... somewhere that's ghost free."

Kojolin the Conciliator: "Through war, we achieve peace. Now is your time to shine, Sunspear. Fight!"
First Spear Janah: "You may arm yourself like a Sunspear, but can you fight like one?"

We have forseen the day your Spearmarshal would call upon us for aid. Know this, kind and noble emissary... when it is time to storm Gandara, you and your brethren will not be alone. In every battle cry, in every fated step, we will be your armor when iron buckles and your spear when steel fails. But first you must prove your worthiness.

"I am uneasy in the presence of spirits, but the thought of charging headlong into Varesh's blade has given me pause. The Sunspears began as the Sunspear Guard under Queen Nadijeh. With their aid we cannot fail."

Start in Blacktide Den and head south into Lahtenda Bog. Use the emote /kneel at the crypt. Three Sunspear ghosts - First Spear Janah, Kojolin the Conciliator and Sogolon the Protector - spawn around you. You need to defeat them to finish the quest. Sometimes you may need to walk away from the shrine then back again for the ghosts to spawn.