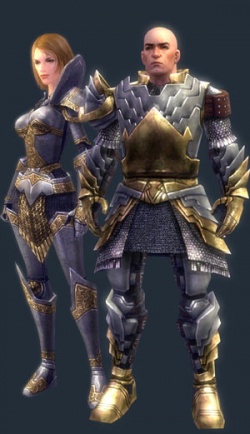 The Warrior is the only core melee profession (the Assassin and the Dervish are available in the Factions and Nightfall campaigns, respectively) and has many skills designed to enhance the use of swords, axes, shields, and hammers. Warriors wear the highest armor of any profession (though the Paragon has equal protection against non-physical damage), allowing them to trade hits with the biggest, meanest foes in the game. They also have the primary attribute Strength, which grants extra armor penetration when using attack skills. Many Warrior skills revolve around combining straight-up physical damage with crippling conditions. They also have access to stances which modify their abilities, and shouts to boost the party's performance or even impair enemies. The patron god of Warriors is Balthazar.

Anyone looking to use a sword, axe, or hammer should take Warrior as either their primary or secondary profession. Keep in mind that all characters are restricted to the armor and primary attribute of their primary profession, but even without the Warrior's armor and Strength some secondary warrior builds can be quite effective. Furthermore, taking Warrior as a secondary can be useful even for characters who will never use a melee weapon due to the Warrior's protective shouts and stances.

The primary Warrior's base armor provides 80 armor and an additional +20 armor versus physical damage. A starting primary Warrior begins with 20 base energy and 2 energy recovery.

The Warrior's primary attribute is Strength, which adds armor penetration to attack skills.

See Secondary professions for a Warrior