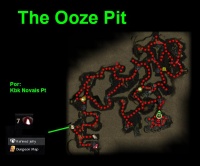 "Pyre charged me with guarding our base and overseeing the siege weapons. The problem is, we're extremely low on ammunition! I've been using gelatinous material from the oozes inhabiting a nearby cave. That stuff is nasty. It sticks to everything and burns forever. I love to watch it burn.... Anyway, it's nearly impossible to transport the gelatinous material of the average ooze without disaster. I lost a lot of troops trying. But we finally found one type of ooze that works fairly well. The prismatic form is stable enough to move most of the time. Bring me gelatinous material from prismatic oozes. Then I should be able to cause a ruckus."

<party leader>: "It looks like this pressure plate is hooked to some sort of door mechanism."

"Ah, just what I needed. I'm impressed, human. You're not dead. Well done. In a race of mostly worthless creatures, I suppose there must be one or two exceptions. Here, I've filled this barrel with some of the ooze. Load the siege weapon and hold onto your entrails! "

This quest unlocks the first door in the Ooze Pit dungeon. Just stand on the pressure plates to open further doors. The Prismatic Chest at the end of the dungeon drops one Prismatic Gelatinous Material per player along with the usual random gold item or gemstone.

Be warned that opening the chest and clearing the spawn without picking up the items that come out will cause the game to force you back into an explorable area. However, if you fast travel to an outpost, the game should offer you the items from the chest as unclaimed, as if you had completed a mission with items left on the ground.