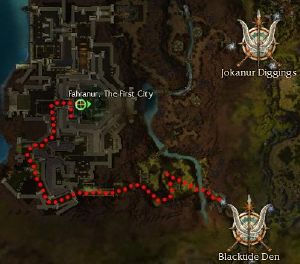 Fahranur, The First City
From either Jokanur or Blacktide, head towards the center of Fahranur. The djinn boss and 3 guards are located in the main hall, roughly in the same place as the Jokanur mission boss. To reach the farm, you have to pass through L10–15 plants and the occasional insect — a few speed boosts plus some anti-hex skills should allow you to ignore most of them. The team should find approximately 1 essence per run. 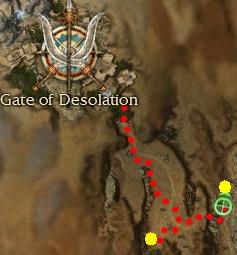 From Gate of Desolation, head south towards either/both of two dead-end areas (marked in yellow on second map). Both spots have 2 djinn and a boss and are blocked by Kournans. It's faster to skip one of the groups if the Kournans present any serious resistance. The team should find approximately 1 essence per run. (Stronger parties can continue east to find an additional 10 or so djinn, increasing the time needed modestly for an extra 1-2 essences/run/party.)

Mehtani Keys
Take the quest War Preparations (Wind and Water), do not accept the blessing of wind and water, and repeatedly farm the water djinn there. If you do not have a low-level Nightfall character, it should be easy to run one to this point in the primary quests/missions on Istan, or farm with someone who has the quest.