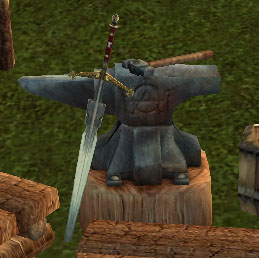 Weaponsmiths can be found mostly in towns and outposts, although there are a few in explorable areas as well. They are noticeable from the "[Weapons]" suffix to their names. Weaponsmiths for max weapons in Guild Wars Nightfall are suffixed with "[Weaponsmith]".

For a fee of 10 gold most weaponsmiths can customize a primary weapon for you, which will increase its damage by 20%, but it also means that no other character can use that weapon except the one for whom it is customized. The exception is that customized weapons can still be used by that character's heroes. The customization of a weapon cannot be removed.

It should be noted that customizing a spell-casting weapon offers limited benefits, and if there is the slightest chance that the weapon will be sold at a later date, it is advisable not to customize it.

Most weaponsmiths are known as weapon crafters too, offering to craft weapons for you if you have sufficient gold and crafting materials. Unlike armor, crafted weapons do not come customized "out of the box", which means you can trade them with other players or hand them over between your characters.

The items offered can include:

Weapons crafted by weaponsmiths can be salvaged (unlike collector weapons).

Weaponsmiths purchased for a guild hall do not craft weapons, they can only customize them for the standard price of 10 gold

For an overview of weaponsmiths with their location and what they offer, see:

For a simple alphabetic list of weaponsmiths, sorted by campaign, see: Category:Weaponsmiths