What Do You Do with a Drunken Shauben? 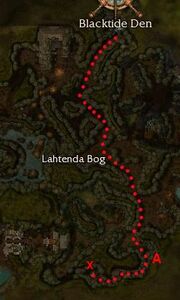 Shortest route to where the warriors are held captive

"[Difficulty: Master] The warriors of the Shauben clan are renowned throughout Istan for their combat skills and bravery. But there is a fine line between brave and foolhardy, and that line gets fuzzy when combined with youth and spirits. Last night a group of talented young warriors were enjoying a barrel of imported Dwarven Ale to celebrate the upcoming wedding of one of their group. One boy got it in his head to eliminate the corsair[sic] in Lahtenda Bog. And, in an amazing display of stupidity, all eight of them staggered into the swamp calling for blood! Shortly thereafter, they were captured by the corsairs and tied up. We heard about the fiasco and sent word to the Sunspear Great Hall. I assume that's why you're here?"

"Bah! Dahleht always overeacts. A few more hours to sober up and we'd have made short work of these corsair fools. Let's get back to Blacktide Den and celebrate our victory over the corsairs. Lead the way."

"It's good to see those young and talented Shauben warriors returned to the clan. I'm sure Ahbri and Tahristahn thought they had the corsairs right where they wanted them. But I greatly appreciate your assistance in this matter."

If you take the most straight forward path to where the quest marker indicates the location of the warriors (point X on the map), groups of high level Corsairs will spawn as soon as you go into the narrow area leading up to them (point A on the map). If you approach slowly, each spawn will comprise of four units, generally two melee (Corsair Cutthroats or Corsair Berserkers) and two casters (Corsair Wizards or Corsair Cooks). Corsair groups will pop up closer to the area where the clan warriors are located in addition to the visible groups. When you get to the point where the warriors are held, there will be 3 groups each consisting of a Corsair boss. These bosses are Ensign Lumi, Ensign Charehli, and Commander Werishakul. It is possible to single out each group through pulling.

After clearing the corsairs, speak with Ahbri, then lead the warriors back to Blacktide Den. To do so, simply backtrack your way to avoid unnecessary surprises. There will be some respawned groups of corsair along the way (lvl 15-17) though. Make sure to wait at the entrance to Blacktide Den until they reach it and the quest log updates.