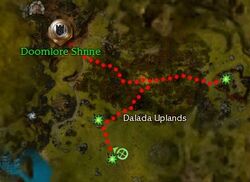 "Breaking into the hierophant's stronghold will be no a small feat, <name>. This assault will take planning and a Charr-like commitment to success. Are you prepared to do what must be done to succeed? Good.

First, go speak with Seer Fiercereign. He has a powerful siege weapon you must learn to use in the upcoming battle. There will be other tasks. Try to complete them without whining too loudly. I cannot stand the sounds you humans make when you're unhappy."

Accept: "I am prepared to win this battle."
Reject: "You ask too much. It's my gods-given right to whine."

"Finally. If you were prey, you'd be dead by now. I have a newly hatched siege devourer, ready for testing. Go stand out there while I load it. Hah! That was a joke. You should see your face. We'll test it on some Shaman scouts, instead. Bring the siege devourer and let's go."

Seer Fiercereign: "The Shaman scouts are east of here. Get a move on!"

Seer Fiercereign: "There they are. Move the siege devourer into range and target those scouts. I made it "human" proof, so even you should be able to figure it out."

Cowl Fiercetongue: "Excellent! Now you can work a siege devourer without having it blow up on you!"
Seer Fiercereign: "If you are not too tired from this simple task, go find Gron Fierceclaw. He's hunting some beast, and mentioned something about needing bait! Hah! Got you again! Seeing the look on your face is worth not eating you! I like you, meat. You're fun to play with. Now, go help Gron. He should be near the fields west of here."
Cowl Fiercetongue: "Beast hunting? Good, I'm hungry. This no-human diet has me cranky. I'm coming too. You don't mind... do you!"

"Good. You're here. Now we can get started. I've tracked an enormous armored saurus to this area. We must tame it to use in our assault against the hierophant's stronghold. Show me what you've got, mouse. The saurus must be cowed or it will not respect your authority."

Gron Fierceclaw: "There it is. Are you prepared? Breaking its will won't be easy for one so frail, but it must be done. Think of your Vanguard and summon your courage."

Cowl Fiercetongue: "It gave up? I can't believe it. I was sure we would have to kill the beast to save you from it's maw. Blast. No saurus steak for dinner."
Gron Fierceclaw: "We will eat after the assault, Cowl. A hungry warrior is a dangerous warrior."
Gron Fierceclaw: "I must teach this beast its commands. The rest of you are late for your next task. Move out. Bonwor Fierceblade needs to teach you humans how to fight like a Charr. Go find him and leave me to my work."

"You're late. If you want to survive against the hierophant's forces, you must learn how to fight Charr. We haven't much time, so shut up and listen. The stronghold troops will fight in formation. It will be like nothing you've faced. Charr formations are powerful in combat and difficult for the weak and uninformed to break. You must be neither in the coming battle. Speak to me again when you are ready, and I will teach you, Charr-style... in live combat.

Are you ready to fight, meat?"

Accept: "Let's rumble."
Reject: "I think I should stretch first."

Bonwor Fierceblade: "Not bad. You understand the basic strategy, at least. There are others, but they are probably beyond your abilities."

"Yes, you handled the formation well... for a mouse. You might just survive the assault after all. Hmmph. You humans, always seeking validation. We move out shortly. Go, rest your frail body while you can. Roan Fierceheart is waiting outside and will brief you when you are ready."

Assault on the Stronghold

It is suggested that you bring along an interrupt henchman or hero if you have one.

Start by exiting Doomlore Shrine to the south. Once in Dalada Uplands, take the Vanguard Patrol bounty from the Ascalonian Refugee by the resurrection shrine nearby.

Follow the quest marker to Seer Fiercereign, Cowl Fiercetongue, and a Siege Devourer. You'll encounter a group or two of Mantids on your way. After speaking to Seer, proceed east to the Charr Shaman patrol. Don't forget to interact with the Siege Devourer and select the "Follow Me" option.

Once in range (Siege Devourer is standing on the quest marker) interact with it once again, only this time choose the "Stop. Activate Siege Mode" option. Note that the range on the Siege Devourer works like a bow. In flat land, it has a spell-casting range, but when given the benefit of higher ground, the explosives fire further.

After the patrol is killed, head off to the next quest marker, and don't forget to interact with the Siege Devourer and choose "Follow Me". To speed up the process, backtrack the way you came from, and simply start heading south once you're nearby the quest marker.

You will meet Gron Fierceclaw at the marker. Nearby you should spot an enemy Siege Devourer. You can use the "Activate Siege Mode" option on your Siege Devourer to help take it out quickly. Once it is nearly dead, it will turn friendly, at which point you can mount it and ride it like a Junundu. The Devourer has its own set of skills which will replace all of your current skills, and maintained enchantments will be lost. Devourers have 1,000 HP and 25 Energy.

If you see Molotov Rocktail nearby, it would be a good idea to steer clear, as he can easily wipe out your entire party in seconds. Regardless, proceed south to encounter the Armored Saurus. It is helpful to start out the battle with the Siege Devourer's Devourer Siege. Just before you kill it, the quest will update and it will turn Friendly. Next, travel back to Doomlore Shrine to continue the quest.

Once in town, speak to Bonwor Fierceblade, and you'll engage in a mini mission where you must defeat the four members of Pyre Fierceshot's warband. Attack Roan Fierceheart first to stop them from healing. Once defeated, you will be teleported back to town, and will be able to collect the reward from Bonwor. The quest Assault on the Stronghold will be automatically added when you accept the reward.