What Waits in Shadow 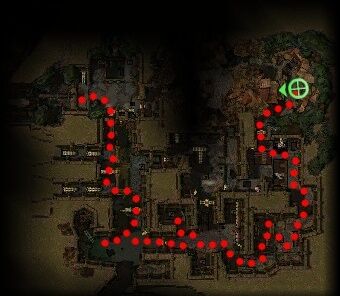 We've been able to discover the name of the Jade Brotherhood's leader, thanks to you. He goes by the name of Reisen the Phoenix, and we've got some leads as to where he might be found. It won't be an easy trip, but the hardship is worth it; we could end centuries of corruption and violence. Let's eliminate this scourge of our people! You are the best asset that the Ministry has, so I want to send you in first.
If you're willing to undertake this, come speak to me again when you're ready. I will direct you to where you should go.

Accept: I understand.
Reject: This is really more your problem than mine.
When asked about quest: I've made preparations to ensure that your travel will be discreet. Are you ready to go?

<player character>: I need to find Reisen the Phoenix. I should try to avoid as many engagements as possible. I don't want any needless bloodshed.

Sheng Pai: When we leave here, go and warn your family.
Jade Brotherhood Warrior: Why? What's going on?
Sheng Pai: I don't know. All I know is that people have been going missing.

Lai, Graceful Blade: I could have sworn that I heard something.
Jade Brotherhood Warrior: I've been having that feeling lately. Like someone is watching, you know?
Lai, Graceful Blade: It is probably not your imagination. Things are not as secure for us as they once were. We can't afford to be anything less than deadly serious.

Jang Wen: I can't believe this! Being forced to skulk about in the shadows as though we were Am Fah!
Jang Wen: Why don't we just take the fight to the Ministry of Purity? What is Reisen trying to prove?

Rei Bi: Bloody Ministry of Purity, giving the people hope. Hah, what a lot of fools! It's more like giving an idiot a dagger without telling 'em which end is sharp.
Rei Bi: If it were up to me, I'd just kill 'em all now! Why are we even here? How pathetic.

Reisen's initial line of dialogue depends on how many of the "speaking" NPCs you killed along the way.

0
I expected someone to come for me, but I never believed that they would be so conscientious as to come for me by themselves. Very well. For the respect that you have shown me, I will fight you as an equal.
1
I knew you would be coming. Word travels quickly, and it did not take great intelligence to see that my life was in danger. You took a friend from me, but that will be the last. Your movement ends here and now!
2
Not quite as clever as you thought you were, are you? Stumbling blindly through here, taking lives along the way. You came to kill me, but instead you killed two of my friends. Now I will take your life as recompense!
3
Three of my friends, dead. And now you show your face in front of me. What gall you have. What made this worth it to you? No matter. This is as far as you go.
4
You took four important lives before coming for mine. What's the matter? Did you not wish to waste time finding and slaughtering my last friend? You wretch. You will regret ever coming here.
5
Pathetic. I wondered when you would come, little dog of the Ministry. You slaughtered five friends of mine; was their blood not enough to sate you? Does your justice require my life as well? Come on, if you think you can take me.

Reisen the Phoenix: Why are you hesitating? Go on! End it! You got my name from the manifest, right? Along with all the other active members of the Jade Brotherhood. Will you hunt them down and kill them, too?
<player character>: Wait. What did you just say?
Reisen the Phoenix: You heard me. Maybe you think we're a nameless evil, but our way of life has existed for hundreds of years. Each and every member of this gang, everyone that you have killed, is a person.
Reisen the Phoenix: Their families will never see them again, and why? All because the Ministry's answer, your answer, to anything they consider wrong is to remove it.
<player character>: Those texts were only supposed to have your name in them. You're telling me that what I handed over to the Ministry was a list of everyone?
Reisen the Phoenix: How sad. You came this far without realizing that you were being used. And now is your chance to speak with the one responsible. I'll be making my exist now...but this isn't over.
Xan Hei: He's escaping! Why did you let him live?
<player character>: Is what he said true? Was that really a manifest? We can't hunt down people like this. We'd be no better than them!
Xan Hei: How naive can you be? Evil exists in this world; we're fighting to end it! If people misunderstand what I must do to make the world better, then so be it. I knew from the start that I didn't belong in the world I was helping to create.
Xan Hei: The future doesn't belong to you or me. It belongs to those who come after us. Their hands will be clean of blood; they need not know any sin, if we pay that price for them. To think that a child, like Ashu, might never again know pain! Isn't that a future worth fighting for?
<player character>: I can't go along with this. The Ministry has been doing good work, but you're taking this too far. There are better ways to make this country strong again!
Xan Hei: I see. I think it is finally time for you to speak with Minister Reiko. Once you see her vision, you will truly understand what we fight for. Do you know why we wear these masks?
Xan Hei: Because we don't fight as ourselves. We represent the will of the people, united in our cause. I want you to be a part of that. Listen to Reiko, meet Ashu, and if their vision does not move you...then walk away from this.
Xan Hei: You can walk away and leave Cantha in the hands of her people, the ones who care most for her.

It's time for you to meet with Minister Reiko, so that you can see the purity of her vision for yourself. For further instructions, speak with the Herald of Purity in Kaineng Center.

A Chance Encounter
What Waits in Shadow (Hard mode)

Come prepared for this mission and bring a long or flatbow. You will be facing many Jade Brotherhood groups, and sometimes more than one group at the same time. Lure every group as far away from the other groups as possible, as a Monk or Ritualist might start healing a wounded member of the group you are currently fighting, and draw a second group into the fight. Don't be afraid to perform a tactical retreat if you are under fire from multiple groups.

The quest takes place in Dragon's Throat, but many of the passages are sealed, forcing you to follow a counterclockwise path through the outer chambers. The narrow tunnels, bridges and hallways are ideal for balling enemies, but that works both ways. Watch out for the axe Warriors, they can deal heavy dammage with Splinter Weapon, Triple Chop and Cyclone Axe. The same goes for the Elementalists, who use 3 different AoE skills (Sandstorm, Eruption and Churning Earth).

There are 5 named NPCs throughout the area. They are initially neutral and will start a short dialogue as you approach them. If you move closer, they will turn hostile. It is not required to kill them, and doing so will cause additional Jade Brotherhood will spawn around them.

Reisen the Phoenix is located in the northeast chamber, with a group of Jade Brotherhood who are initially neutral. Approaching will turn them hostile. Beware of his Spirit Rift and Meteor skills as these can easily wipe out your entire party. Reisen will revert to neutral after losing a certain amount of health, at which point your character allows him to escape.