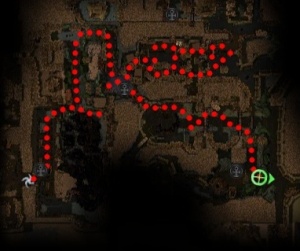 First drakes and now kappa! I've got a new report of some violent kappa appearing in the sewers of the Undercity. I'm not sure exactly what is causing it, but they have been attacking some of the citizens that live down there. The Ministry of Purity has volunteered to lend us one of their elites for this job, so you should go and meet Oroku in the Undercity before you start. I would come with you on this job but there is still a mountain of paperwork to deal with regarding the drakes. Give Oroku my regards.

Accept: It seems like you've got a lot to deal with. I'll go in your place.
Reject: If it's so important, why aren't YOU going into the sewers?
When asked about quest: Ministry of Purity agent Oroku will meet you in The Undercity to investigate the kappa problem.

Intermediate Dialogue 1 (when you meet Oroku)

Oroku: You are the ones the Imperial Guard sent? Typical. They couldn't even send one of their own for this job.
<player character>: He wanted to come but had other matters to attend to. He requested we offer you his regards.
Oroku: Ha! More likely he simply didn't want to get his armor dirty. This is why the Imperial Guard is looked down on. But the Ministry of Purity is different.
<player character>: That's not really fair...
Oroku: Believe what you wish. The truth is plain to those who would look for it. Let's get moving. I've already used some scrying magic to locat e afew of the sources of corruption that has been turning the beasts violent. We'll head out a purify these locations now.

Intermediate Dialogue 2 (as you approach the first location)

<player character>: You said that this was a corruption, but didn't we get rid of the plague?
Oroku: Corruption exists in many forms; even if Shiro is gone there are still those that would try and revive his legacy. Ultimately, the real corruption comes from within, but that's where the Ministry of Purity comes in. Now, stand guard while I purify this area.

Intermediate Dialogue 3 (after the first ritual is complete)

Oroku: The ritual is complete. Let's move on to the next area.

Intermediate Dialogue 4 (as you approach the second location)

Oroku: Another corrupted area. Watch for enemies as I purify it.
<player character>: What is that ritual you are using?
Oroku: Our founder, Reiko, has done some research on Shing Jea Island. She developed this ritual by studying Zunraa, the guardian spirit of Zen Daijun. Only high-ranking members such as myself have been given the honor of learning it.

Intermediate Dialogue 5 (after the second ritual is complete)

Oroku: I've finished purifying this area. As much as sewer water can be purified anyway.

Intermediate Dialogue 6 (as you approach the third location)

<player character>: This area has been corrupted too? What could be causing this?
Oroku: I'm not sure yet, but I've got a pretty good idea.
<player character>: Could it be some kind of spirit, like Shiro?
Oroku: No, this is the work of men.

Intermediate Dialogue 7 (after the third ritual is complete)

Oroku: That was the last of them. Now to deal with the source.

Intermediate Dialogue 8 (as you approach the final objective)

<player character>: The Am Fah! You're the cause of all this corruption?
Kai Shi Jo: You Ministry fools are too late! I have already completed corrupting of [sic] the strongest kappa in these sewers! With their power behind us, the Am Fah can finally be rid of the Jade Brotherhood.
Oroku: All this for your petty gang war? The Am Fah are a blight on this country, and I will cut you out for the sake of our future!
Kai Shi Jo: We'll see if you can. Attack them, my kappas!

Another Am Fah plot, eh? We had suspected they might have been involved but had no proof. It's a good thing you dealt with it though; having a swarm of corrupted kappa reaching the city proper would have been a disaster. Oroku has already gone back to give his report to the Ministry, so all that's left is your reward.

This quest is complicated, not because of the enemies, but because of the multi-story nature of The Undercity. The map above MIGHT help, but expect to get lost a few times.

Oroku is located next to the Wajjun Bazaar entrance to The Undercity. You can leave from Nahpui Quarter to pick him up directly, or you can leave from Vizunah Square (Local Quarter) and clear the Am Fah along the way. Since Oroku is an assassin, he will charge ahead into the thick of battle against the Am Fah, so clearing them ahead of time may be advantageous.

The kappa have already begun to show effects of the corruption, the most obvious being that they are no longer all elementalists.

At each of the 3 corruption sources, you will have to defend Oroku against a kappa assault. Luckily, he will not attack while purifying the corruption, so he is easier to keep alive. Note that the second location is on the lower level; standing on the bridge directly above it will not work.

The final encounter consists of 5 bosses: