The Winterfest 2006 Tournament was a seasonal tournament event during Wintersday 2006 sponsored by ArenaNet. Guilds participated by playing GvG-Battles culminating in a Guild Wars Nightfall only swiss system tournament that offered guilds a chance to win wintergreen candy cane weapons and other in-game prizes.

To some degree, the Winterfest 2006 Tournament served as beta test for the future structure of official sanctioned tournaments.

The Winterfest 2006 Ladder Season started on October 28, 2006, with a reset of the guild ladder; all guilds started with a rating of 1000. During six weeks leading up to the season ending playoffs, guilds competed against randomly paired (but weighted based upon ratings) guilds in single-game match play. The ladder season ended on December 11, 2006.

During the season ending playoffs on December 16th, 2006, the top 32 eligible rated guilds competed in a Guild Wars Nightfall only five-round single-game swiss system tournament. The 1st round pairings was seeded by the final tournament ladder rating. Matches consisted of one battle on a set map.

After the fifth round of the swiss system tournament, the top eight guilds (based upon win loss results and opponent's match-win percentage as the tie-breaker) met in a single elimination tournament taking place December 17, 2006. Matches in the Winterfest 2006 play-offs were decided by winning 2-out-of-3-games with the higher seeded team having home-field advantage in the first game. 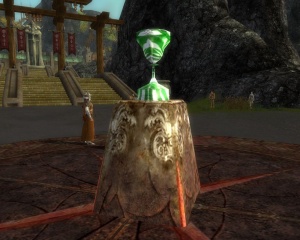 The Championship Trophy in the Great Temple of Balthazar

The winner of the Winterfest 2006 Tournament and the guilds lineup are immortalized by the Winterfest Championship Trophy in the Great Temple of Balthazar.

(**) = results were retroactively corrected days after the finals were played

The teams were seeded according to their swiss system rounds final standing.