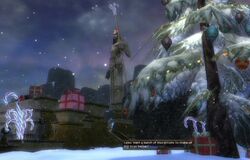 Most of the events were restricted to the Prophecies and Nightfall campaigns; however, players with only Guild Wars Factions could access the Dwayna Vs Grenth snowball arena, and the Candysmiths from the Great Temple of Balthazar on the Battle Isles.

Tuesday, January 2nd, 2007: After the last finale Wintersday Gift Givers appeared in Ascalon City, Lion's Arch, Droknar's Forge, Kamadan and Great Temple of Balthazar. The Snowball fight and Present Hunt were still available as were all quests, all collectors and all other NPCs except for the Wintersday Criers. Monsters stopped dropping Candy Cane Shards as loot, however they were still available from the other methods of acquisition.

Thursday, January 11th, 2007: Due to Grenth's victory over Dwayna this year, winter has been extended through Noon PST (20:00 GMT) on Thursday, January 11, 2007. Players can continue to compete in the Snowball Arena, join in the holiday quests and missions, and dodge Grentchies in Kamadan and Lion's Arch. Through participation in various activities, players will accumulate Candy Cane Shards which they may exchange for Peppermint Shields, Gingerbread Shields, and Candy Cane weapons of all kinds. And of course, players can also trade those shards with the Wintersday Gift Givers in Lion's Arch and Kamadan for valuable Wintersday Gifts that contain a variety of exciting items!
Quote from Guild Wars official site
"Wintersday Event Extended! 5 January 2007
We are happy to announce that the Wintersday Event will be extended until 11:59 p.m. PST on Thursday, January 11th (7:59 a.m. GMT Friday, January 12th). You can use these days to enjoy more PvP battles in the Snowball Arena, to join the holiday quests and missions, and to redeem your collected Candy Cane Shards for Wintersday Gifts."

During the festivities, special quests were offered:

Note: these quests are grouped in the Festival Event Quests section of the Quest Log.

Wintersday 2006 featured the PvP version of the snowball fights known from Wintersday 2005's event, as well as an all new PvE version:

This was the repeat of Wintersday 2005's present hunt. Periodically a present spawned. Players must spot the present, pick it up quickly and deliver it to one of the Young Children in town before any of the Grentches reach the present and destroy it. Grentches could also destroy presents held by players if they come within adjacent range.

In return, the child would hand the player a Candy Cane Shard or, if the present is handed to Scrappy Jhim in Lion's Arch, a Winter Gift which will unwrap into a random Wintersday item. Grentches moved faster than players, however Sugar Rush could be used to outrun them. When a present spawns the Grentches would run all the way to the spawn point before chasing someone who had picked it up. It appears that a new present spawned whenever a present is turned in or destroyed. In Lion's Arch, Grentches could be trapped on the left side of the lighthouse door if someone with a speed boost carried a present there and waited for the Grentches to arrive and destroy the present. 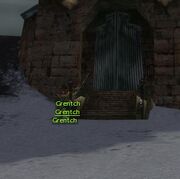 On January 1st, 2007 in Lion's Arch and Kamadan, the Avatars of Grenth and Dwayna appeared for their annual challenge. To vote for your god, find the rings that look like the setup from Nine Rings in town. Players could stand in blue (Kamadan) or green (Lion's Arch) rings for Dwayna or red rings for Grenth with a Candy Cane Shard as the wager. There were 3 rounds with 5 matches each. Once the match began, every few seconds, a ring would randomly be chosen from each side. Players standing in the the chosen ring were rewarded with a Wintersday Gift. The winning and adjacent rings were awarded 1-5 candy cane shards depending on which ring they stood in, and also had their winning shard count added towards the score of their side's god. These wagers did count towards the Lucky and Unlucky Titles. After the match ended, the god with the highest total was considered the winner, and all players in the district were given a festival hat.

After the event, fireworks started (with different styles depending on who wins) and Wintersday Gifts dropped. Each gift was assigned to only one player, but the standard item assignment timer did apply, so it was eventually possible to take presents assigned to players who were AFK or who left the district. The gifts spawned near the player which they were assigned to. All players received the same amount of gifts. If Grenth won, Grentches would start killing players and a lethal ice bombardment would start, concentrated around the two sets of rings. The Avatar of Dwayna would resurrect any fallen players. These deaths did not count against the Survivor title.

Throughout the event, players were encouraged by other players to go to an even districts to support Dwayna, or an odd district to support Grenth. This was to make the outcomes predictable, to simplify the process of obtaining all four hats.

This event was hosted by the Xunlai guild. It revolves around the Winterfest 2006 Tournament. Contestants won Wintergreen weapons for correctly predicting the outcome of tournament games and may claim their reward from a Xunlai Tournament Agent. Note: this NPC is now available (Gaile indicated the Wintergreen Weapons will be available on 11th January).

The following NPCs threw non-damaging snowballs at players and NPCs in towns:

A number of collectors appeared in the above listed event towns, handing out special reward items in return for special collectible items. The selection differed, depending on whether the collector supported Dwayna or Grenth.

For a listing, see: Wintersday 2006 collectors.

A number of candysmiths appeared in the above listed event towns, they offer candy and gingerbread weapons in exchange for Candy Cane Shards,

For a listing, see: Category:Candysmiths.

New festival hat makers were introduced to Kamadan and Lion's Arch, and are permanently placed in these towns. They are able to "copy" festival hats among the characters of an account for 10 gold. This service is meant to reduce the amount of storage and inventory space occupied by festival hats. A festival hat maker was not added to Shing Jea Monastery until Canthan New Year 2007.

In both Lion's Arch and Kamadan, there were sets of carolers for Dwayna and Grenth. They rotated through dialog that sang alternate versions of commonly known Christmas carols.

In Kamadan, there was a level 10 Dwarf, held by a Dwarf Guard. Talking to the Winter Dwarf would present three dialog options. The Winter Dwarf, pleading to the player (and Grenth) for merciful death, dies when a player selects the third response. His death was short-lived, as the guard quickly noticed and revived him, wondering how he died in the first place.

In various cities there were Enchanted Snowman henchmen that can be added to your party. These snowmen were Elementalists specializing in Water Magic.

The Frog was located in Lion's Arch and Kamadan, wearing a Yule Cap.

The following are the available items from Wintersday 2006, with a brief description from the official Guild wars website:

After present gathering Wintersday Gaile organized her famous "Conga Line" and ran everyone through Kamadan. Wintersday Gaile and Breaded Man also organized many screen shots in different variations from mass rank emotes coupled with cheering to dancing circled around the centre decorated tree.

At one point players witnessed Breaded Man gathering the un-reachable presents in Dwayna's grandstand area. Gaile made a post that they are planning to give those presents to accounts owned by players that live in an area struck by an earthquake, disrupting their internet access and preventing them from partaking in the event.

Wintersday Gaile and Breaded Man indicated they were gathering footage and images of the event for an up-coming video that will be posted on the Guild Wars web site.