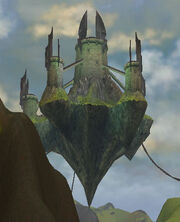 The Wizard's Tower is a big, fortress-like building consisting of a center tower and 4 side-towers. It sits on a mysterious rock floating in mid-air at the south-western edge of Kessex Peak.

You can see the tower up close from Kessex Peak, and you can also see it clearly from the opposite side of the bay, from the Stingray Strand, and Sanctum Cay.