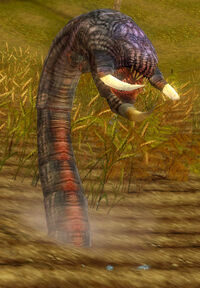 Worms resemble ocean going tube worms more than the garden variety, albeit ones that are taller than a human and have three huge teeth at the end of their maw. They seem to be much smaller cousins to the giant wurms found in the latter parts of the game.

The main difference between these and Wurms is that Wurms are much larger and will attack without provocation, whereas Worms are much smaller and will usually only attack if provoked.

For a listing of known types of worms units see Category:Worms.