This is a chest that can be found in Isle of the Nameless, at the top of the stairs in the south-west corner, within the guild hall. It can only be opened with a Zaishen Key, which can be obtained from the Hall of Heroes Chest, bought from Tolkano for 5,000 Balthazar Faction or 5 Tournament Reward Points, or bought from Jessie Llam in the Great Temple of Balthazar in exchange for 1 Gold Zaishen Coin and 100

. The only other way to obtain a Zaishen Key is to buy one from a player. 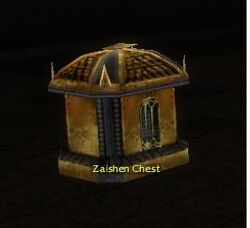 Research into the drop rate of the Zaishen Chest is ongoing and can be found here.