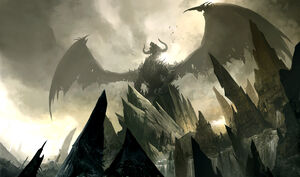 In 1219 AE, Zhaitan arose from the depths underneath Orr. As it awoke, it raised the sunken peninsula of Orr, triggering earthquakes and tidal waves that destroyed entire cities across the Sea of Sorrows, including the Battle Isles and Lion's Arch, and capsized many ships. Zhaitan used its powers to create an undead army composed of dead Orrians and the Corsairs who hid among the wreckage of Orr. This army sail in black-sailed ships and patrol from the newly risen Orr across the Strait of Malchor to the beaches of the Ring of Fire Island Chain, blocking off all sea passage to Cantha and Elona.