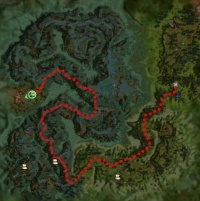 Path To the Lair in the Falls 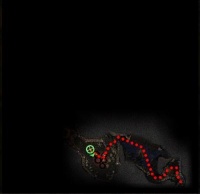 "[Difficulty: Master] To preserve Zinn's reputation as well as the great Kingdoms of Tyria, you must find and deactivate the R.O.X., N.O.X. and P.O.X. golems."

Accept: Save an Asuran's reputation? What a noble cause. I'm in.
Reject: I will not comply.

As promised, here is further compensation for your services. Perhaps I underestimated you...I mean, I'm happy my faith in your abilities rang true.

Zinn's Secret Underground Lair is found by going to The Falls in Tyria with M.O.X. in your party.

To get there, start from Ventari's Refuge, and travel south to Reed Bog. From there, travel south-west to The Falls. Once you are in The Falls, head West as far as you can go, then head North. You will have to cover approximately half of The Falls map area. Be on the lookout for a number of spider pop-up's in the early areas. After these, most mobs (including some boss mobs) are avoidable. You will also have to circle around clock-wise and cross over the vine bridge going North. You will find yourself battling a few small mobs of Wind Riders before coming to Behemoth Jaw Collector Agrippa Stonehands. Approach and click on "The Falls" which can be seen on top of a large rock behind the collector, overlooking the western falls.

Once you are in the Secret Underground Lair, there are no more foes. Just go see Zinn for your rewards.