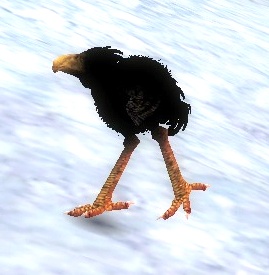 The Black Moa Chick is a green Miniature.

This miniature is obtained via a cross-campaign scavenger hunt. Players must have all three campaigns plus the expansion in order to complete this quest. There are four basic steps:

Your clues are all located in Zho's Journal, obtained from defeating Zho in The Norn Fighting Tournament. The journal will be customized to the character that defeated Zho.

With the journal in your inventory, speak to Captain Juno in Cavalon, who will send you on to Katharine in Gyala Hatchery. Take the journal to Katharine and she will offer to craft an Incubator Kit. As with the journal, the incubator will be customized to the character that crafted it and is only obtainable once per character. The cost is 50 Spiritwood Planks, 10 Steel Ingots, & 5

Katharine can be found just north of Leviathan Pits. To get there, you must complete the quest Befriending the Luxons, then either:

Collect the following six items and place them in the incubator:

Once all six items are placed in the incubator, travel to Sorrow's Furnace with the quest The Final Assault active. Fight your way to the central furnace and allow the Iron Forgeman to hit you with Sorrow's Flame. This will hatch the Black Moa Chick (the incubator and all the components will be consumed). If you are having trouble hatching the chick, first make sure that the Sorrow's Flame icon is showing in your damage monitor area. If you were hit by Sorrow's Flame, check to make sure all the items are actually in the incubator (not in your inventory!) and try again.

Here's a full list of all the items you will need, where to obtain them, and any special requirements.