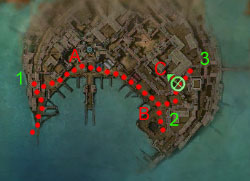 Dunkoro must be in your party to enter the mission.

The Time is Nigh must be completed in order to enter the mission.

In this mission, the rewards are based on how many Kournan field marshal groups, each led by a Kournan Field Commander, you defeat.

You get a few Sunspear Warriors as allies at the start. Work your way up the pier and kill the groups of enemies there. Killing the group of Kournan Bowmen at the top of the stairs will secure the northern wall. Bowmen have Whirling Defense, which can slow things down. Going down the stairs and kill the group to the east to secure the western gate and open it up for your party (A). Additional mobs will continually spawn as long as Captain Lumanda is alive, so kill him quickly. You may wish to kill some relatively fragile Kournans first to avoid being overwhelmed, before focusing fire on the boss.

After fighting some more Kournans, you will reach four small groups near a fire barrier. Stepping in the fire will instantly kill you, so keep away from it. Clearing all of the Kournans will remove the fire, and allow Nerashi, Lonai, and Rojis to join you as allies. Note that allies often get stuck on the terrain here, but can come unstuck if you move around near them. Make sure they're all with you before moving on.

Clearing further to the east, there will eventually be four small groups surrounding some siege equipment. Kill all four groups to trigger a cutscene and open the way to the rest of the mission. Immediately after the cutscene is Captain Mwende's group. He can do very heavy area damage with Fireball and Meteor, so it helps to spread out and kill him quickly. Interrupts also help, but dazed is unreliable, as he comes with paragons that can remove conditions. Beyond this, clear a few more groups of Kournans to reach the main square (C) and complete the mission.

The bonus will activate after securing the northern wall. There are a total of three "field marshal" groups, each of which contains a Kournan Spotter, a Kournan Field Commander, and a few other Kournans. The groups spawn at points 1, 2, and 3, and the bonus is to clear all three groups. If doing the bonus, be sure to get the group at point 3 before ending the mission nearby at point C. Kournan Spotters can call in some siege fire, which will hit your party four times over the course of twelve seconds. The siege fire does little damage, but interrupts with each pulse.

Bring something to stop the groups of Kournan Bowmen from doing their normal damage, as packs of them focusing fire on a single character can be a problem. There are several places where it helps to pull small groups of Kournans apart a little, though they won't chase very far. In particular, after Lonai, Rojis, and Nerashi join you, it can help to let the Sunspear Warriors that spawn ahead of you die on their own before pulling the Kournans there apart.

If having trouble with Captain Lumanda, you can pull his group back to the Sunspear Rangers for help. Captain Mwende hits very hard with Fireball and Meteor, so it can help to spread out a bit and interrupt his casts. Dazed is unreliable, as paragons in his group will remove it with Cautery Signet.

Kormir: <party leader>, take your squad and capture that forward wall. We'll bring reinforcements to you once it's captured.

Dunkoro: That Kournan officer coordinates enemy troop movement. Take him out and we'll stem the tide of replacements.

Kormir: We have them flanked!

Kournan Phalanx: Huh? They are behind us! Quickly!

Nerashi: Fall back! Away from the fire!

Nerashi: It's about time you got to us.

Kormir: Nerashi, save it for the Mists. Lonai, can you make us some 'reinforcements?

Lonai: Of course. You heard the Spearmarshal!

<party leader>: Rojis! What can we do to break down these walls?

Rojis: Not much, I'm afraid. They've got heavier artillery than we do.

Dunkoro: I have a plan. We can capture that Kournan bombard. They haven't fully set it up and it's still facing their gate!

Warmarshal Varesh: All troops! Pull back!

Warmarshal Varesh: Set up defensive positions at the Plaza of the Five Gods!

Dunkoro: Those Kournan spotters are coordinating the siege attacks on our ships. If we can eliminate some of them, our landing troops will have an easier time.

Dunkoro: Then why push forward?

Kormir: We must take the brunt of Varesh's dark magic.

Kormir: We must be the ones to protect Elona.

Dunkoro: We've gotten word from Kormir. She's trapped Varesh Ossa at the Plaza of the Five Gods and needs reinforcements.

<party leader>: We'll be there at once! Move out!

Kormir: Good to see you, Captain. Varesh has holed up here with her followers. Now that you're here, we can make the assault! Sunspears! At the ready! Spare those who surrender! Now, in the name of the Five Gods, forward!

Prophet Varesh: Fools! Your gods are weak! My god gives me strength! Abaddon!

Dunkoro: Gods! She has demons!

Kormir: Regroup! Fall back! Don't let them get behind you! Blast! We're outmatched! Retreat! Save those you can!

Prophet Varesh: Abaddon will feast on your eyes!

Dunkoro: Come on! Save who you can!

<party leader>: Where's Koss? Where are the others?

Dunkoro: This way! We can retreat across the bridge.

Prophet Varesh: Running will not save you, fools. Abaddon is strong! Nightfall is coming!

Narrator: Their allies slain or captured...