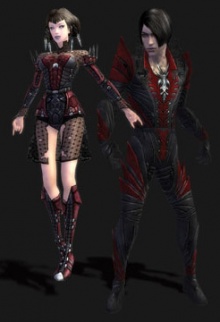 A female and male necromancer

The Necromancer is a versatile class that focuses on manipulation of performance, health and energy of foes and allies, as well as their unique ability to exploit corpses for various uses, including animation of undead minions and creation of defensive and offensive wells. Many of the powerful Necromancer skills require a health sacrifice, which is uncommon among the other professions and requires special attention to their health, but is sometimes used to the player's advantage. The patron god of Necromancers is Grenth.

Blood Magic is powerful at manipulating health of both the player and his/her allies and enemies through sacrificing, life stealing, wells and redistribution of health. A Blood Magic Necromancer is also highly competent at keeping up allies' energy supply by use of Blood Ritual, Blood is Power or Well of Power.

Curses are considered the most insidious of the Necromancer's attributes, with the ability to punish, weaken, remove enchantments, and otherwise hinder the foes' performance. Much of a Necromancer's Curses arsenal is centered around the use of hexes and conditions, and often requires direct health sacrifice or inflicts degeneration and other conditions on the caster in exchange for a powerful blow to the opponent.

A focus on Death Magic will give the player the skills to disease and deal direct damage to foes, as well as the ability to exploit corpses to consume and explode them, summon undead minions and create wells.

The Necromancer's primary attribute is Soul Reaping, which provides energy whenever nearby creatures die, up to three times per 15 seconds. Though very few skills are linked to this attribute, its inherent effect gives the Necromancer a powerful way to recover energy in the heat of battle.

Energy-support Necromancers, often called "batteries" or "BiPs", use the skill Blood is Power to supply their allies with additional energy recovery. For casters such as the Elementalist and the Monk, this is extremely beneficial as it allows them to continue using their skills without running out of energy. Batteries are very popular for supporting bonder Monks and nuker Elementalists in areas like the Fissure of Woe.

A common Necromancer build that uses Curses to drain an enemy's health or inflict damage whenever any enemy attempts to attack or use skills. This build is centered around the elite hex spell Spiteful Spirit. This skill, as well as the build itself, is usually referred to as "SS." SS Necros can quickly cause high amounts of armor-ignoring damage to any group of enemies, be it spellcasters or attacking classes. SS Necromancers are often seen with 55 Monks: the 55 holds enemy aggro while the SS deals massive damage to the attacking foes.

Often referred to as "MM", a minion master uses Death Magic to animate a small army of undead creatures from the corpses of fallen foes and allies alike. An army of these undead minions helps to alleviate the damage received by the party and inflict a large amount of damage back towards the opposition. When the corpse supply runs low, the minion master must rely on minion healing skills, like Blood of the Master, which require high health sacrifice. This may be dangerous to inexperienced players if they don't watch their health closely, because the death of their master will turn the entire army masterless, making them hostile to everything in sight, including the creator's allies. Certain skills, such as Barbs from the Curses line or Death Nova from the native Death Magic attribute, are sometimes used to increase the effectiveness of the army. MMs are particularly popular in PvE, due to the large number of corpses available. However, certain areas have very few "fleshy" creatures, usually rendering the Minion Master useless. Only the most skillful MMs may keep up their trade here by use of Jagged Bones, a skill very well used by minion master heroes.