Play as Turai Ossa and battle the forces of Palawa Joko

Witness the events as the armies of Palawa Joko invaded Kourna and were met by the combined forces of Sunspears, Vabbian refugees, and the Kournan army.

Durmand: "But should Turai fail, then all of Kourna would fall."

During this mission, you will be under the effects of the Turai Ossa disguise, which sets your stats to 700 Health, 25 Energy, 2 Energy regeneration, 14 Swordsmanship, 14 Tactics, and 11 Strength, and gives you the following skill bar:

You start on top of a cliff overlooking an army. Proceed in a northward direction up the cliff until you reach a group of Awakened Troopers. Use Giant Stomp to knock down and damage all enemies within earshot. Then use "For Great Justice!" and attack the enemies, making sure to use "For Elona!" to increase your attack speed and give your allies armor. Use this tactic throughout the entire mission.

After you defeat the Awakened Troopers, there will be several groups of enemies on cliffs ahead of you. In order to proceed, you are required to kill all of these enemies. The best approach is from the left. Once the area is clear, the doors will open and allow you to continue.

Here you will find the Corsair camp. Attack the group to your far right, making sure to avoid the other groups. Once they are done, you can simply walk around the large group that has now formed in the center of the area.

On the bridge, you should charge up and use Giant Stomp as soon as most of the enemies are within range. Make sure to kill the Acolyte of Joko quickly, otherwise it will summon minions.

The next part features 6 groups, each consisting of identical enemies. These groups will charge once the group before them has been defeated. The order is 3 Awakened Blademasters, 3 Awakened Acolytes, 3 Carven Effigies, 3 Awakened Dune Carvers, 3 Awakened Thought Leeches and 4 Acolytes of Joko.

After the last group is done, you will come across 3 bridges. For the fastest route, take the middle bridge. Once you defeat the group on the bridge, a group of 3 Awakened Blademasters will run down from the left. They should pose no threat. Proceed to kill the 2 Awakened Thought Leeches and Awakened Acolyte nearby. Once they are dead, engage the group on the raised platform. Proceed to move toward the group up on the cliff. To be safe, once the group starts moving, fall behind your allies and let the group come to you.

Now you will have to run along the cliff until you get to a bridge with Palawa Joko on it. You will now have to duel Joko. Position yourself next to Joko and wait for him to become hostile. Use Giant Stomp as soon as he becomes hostile. Afterwards, use Giant Stomp whenever it recharges, Distracting Blow to interrupt Joko's skills, "For Elona!" to increase your attack speed, Dragon Slash and Whirlwind Attack to deal damage, and make sure to heal using Healing Signet. Note that Dragon Slash can be used repeatedly without delay, or "spammed", under the effects of "For Great Justice!". You will only have to get Joko to about one quarter health to win. 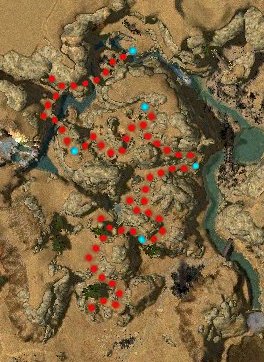 Points for discovery objectives one and two.

1. You have found the strategic viewpoints Turai would have used to plan his assault on the undead lord.

Find the 5 vistas which provide a clear view of enemy formations and the battlefield.

2. You demonstrated the tactics Turai may have used to defeat Joko's elite bodyguards.

Kill 5 groups of elite bodyguards on the way to battle Palawa Joko. All of these groups spawn behind your party upon arriving at each strategic viewpoint.

3. You showed how swiftly Turai could have routed Palawa Joko's forces.

Defeat Palawa Joko in under 15 minutes. This time challenge, compared to other time challenges, is harder than the other ones in the Bonus Mission Pack. A good way to beat this is to utilize "For Elona!" when it charges and run pass the last group of mob to face Joko yourself.

There are many references to the graphic novel and movie 300 in this mission.