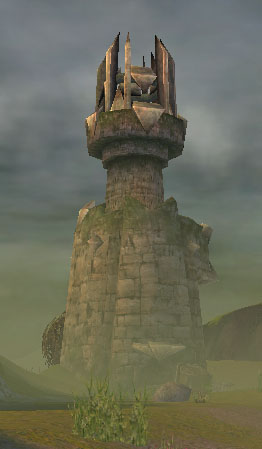 Abbot Ramoth is standing by this tower

Brother Mizar in Temple of the Ages

"Any fool can see that these Unseen Gods of the White Mantle are nothing more than a ruse used by the Mantle to usurp power in Kryta. If I can obtain a copy of their most secret holy tome, the so-called Litanies of the Unseen, then I could prove them false. It is rumored that a powerful White Mantle priest called Abbot Ramoth is journeying through the Black Curtain on a mission of some foul purpose no doubt. If you could kill Abbot Ramoth and retrieve a copy of the Litanies of the Unseen, I would be very grateful. Would you assist me in this matter?"

From the Temple of the Ages, head west, over a small bridge through the swamps, towards the portal into Talmark Wilderness. If you prefer to avoid the swamp area altogether (and less fighting), head south, around the group of Reed Stalkers, until you reach a pathway. Follow this pathway westward.

Before getting to the portal, you will see a small tower (see image). Right by the tower you will find Abbot Ramoth, along with a few White Mantle Knights and Justiciars guarding him. Kill Ramoth and he will drop the Litanies of the Unseen. Return it to Brother Mizar for your reward.